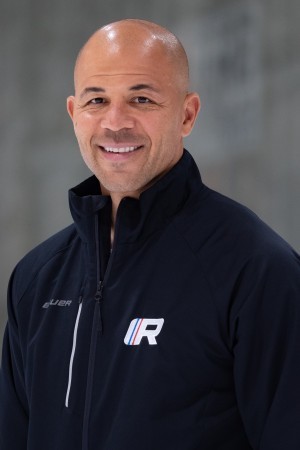 The No. 11 pick by the Dallas Stars in the 1995 NHL Draft, Iginla won or contended for nearly every award available to an NHL forward, starting with a runner-up finish to Bryan Berard of the New York Islanders for the Calder Trophy as the NHL's rookie of the year in 1996-97, when he scored 50 points (21 goals, 29 assists) for the Calgary Flames. A two-time Memorial Cup winner with Kamloops of the Western Hockey League, Iginla skated right out of junior hockey into the 1996 Stanley Cup Playoffs with the Flames. He played two games in a first-round loss to the Chicago Blackhawks. The WHL Player of the Year for 1995-96 after scoring 63 goals and 136 points in 63 games with Kamloops, Iginla became Flames property as part of a Dec. 1995 trade that sent Joe Nieuwendyk to Dallas. Jarome has spent the past 4 years coaching minor hockey in Boston, Massachusetts, a hot bed for hockey in the north east of the United States. He has coached his sons, Tij and Joe’s respective minor hockey teams, and most recently helped bring the 2006 Boston Jr. Eagles from a 20th ranked team to #1 in the nation. They have competed against all the top Toronto-based team like the Jr. Marlies. Along with coaching the Jr. Eagles, Jarome has also been coaching the past three seasons with the 2008 Boston Jr. Terriers.