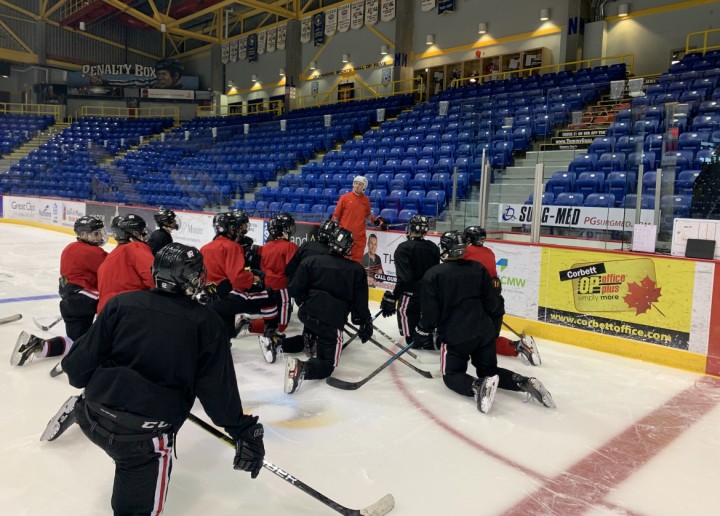 The kick-off to our inaugural year as RINK Hockey Academy has been a very smooth transition! October has been a great month of settling into team routine, practices, workouts and team bonding. The U-17 Prep team has been taking full advantage of all the resources the RINK has whether it is guest coaches, testing and metric tracking.

With the new adjustments in the world and having to adapt to the new way of life, the U-17 Prep team has adapted comfortably practicing and playing games within our cohort. The boys have had ample time to practice and focus heavily on skill development. With Dr. Jeff Leiter from RINK Testify Performance in Winnipeg, MB coming and running our boys through various on-ice tests to look at improving and focusing on knee drive, blade engagement and creating separation speed. Along with, in our practices we have been lucky enough to have many guest coaches for our practices such as Larry Robinson, Curtis Hamilton and David Roy. Along with, Jon Cara & Dwayne Gylywoychuk from the RINK Training Centre in Winnipeg, MB made a trip down where they instructed the boys through a couple skill development sessions. The team learned tons of new techniques they can carry into their everyday practices and game play. As well as Dwayne lead the coaching staff through a mentorship program offering a variety of different resources and supports to make this a successful season for everyone involved!

Not only are the U-17 Prep boys getting lots of training on the ice, but off-ice as well with Coach Sarah from Crave Fitness. The boys competed in a 20 MINUTE WALL SIT! It is safe to say, their legs were BURNING! Our weekly sessions with Coach Sarah have been fantastic, for October the team focused heavily on training our minds to push beyond our physical limits, translating this mindset onto the ice as well.The U-17 Prep game play kicked off with an intersquad game against the RHA Kelowna U-18 Female Prep team where the boys took the big W for a 10-3 win – man did the girls put up a good battle though! With a Strong start to the season holding a 2-3-1 record.  The team has played OHA White, OHA Black, and East Kootenay U18 within their cohort.

Thanksgiving approached quickly, members of the U-17 Prep boys who are billeting celebrated thanksgiving dinner at Ezekiel Kirkness while others celebrated at home with their families for the holiday. The team is excited to keep the record growing and for more experiences growing together as a team!