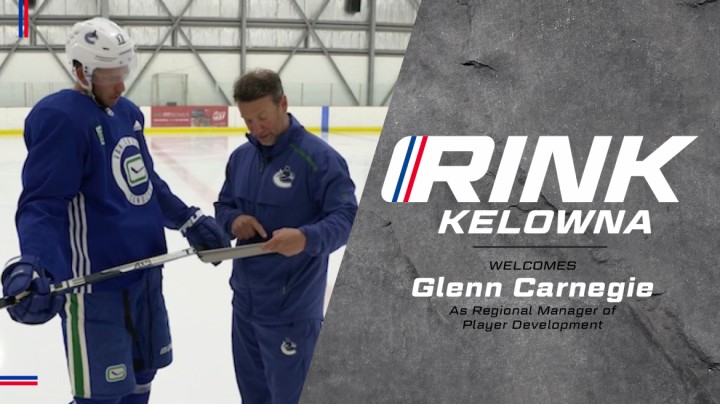 Long time skills coach of the Vancouver Canucks joins RINK Kelowna as Regional Manager of Player Development B.C. Glenn will be leading RINK Kelowna’s on-ice skill development and off-ice conditioning in conjunction with RINK Winnipeg and RINK Testify Performance philosophies. His role will be to oversee the development of RINK Hockey Academy Kelowna student-athletes as well as programs and camps ran within the region.

“I’m really excited for the opportunity to join The RINK Hockey Corp. and a group leading the industry in athlete development and sports science. For me, it is going back to where I started within the hockey industry and focusing on the development young players and people,” said Glenn Carnegie when asked about his future role.

Glenn brings a wealth of experience to the organization with over 20 years in the hockey industry and last 10 at both the NHL and AHL levels. Players alike praise Carnegie’s coaching approach to both skill development and each player’s individual game. Carnegie had been with the Canucks since the 2008-2009 season. He spent a season as a conditioning coach with the Manitoba Moose, in his hometown of Winnipeg, before being promoted into a skills coach role with the NHL club a season later.

When asked about what he hopes to bring to the organization and program Glenn said,” I’m looking to bring a wealth of experience and knowledge to both athletes and staff. Through my years in the AHL and NHL, I have a deep understanding and appreciation of what it takes to get to the next level and to stay there. That is something I want to instill in our athletes and provide the necessary environment to succeed in whatever aspect of life or hockey they wish to pursue.”

Glenn will join the team at RINK Kelowna early in the new year and will have touch points with all current RHA Kelowna teams as well as be involved with RINK Kelowna’s Spring Hockey Programs that are set to start this spring.

“The addition of Glenn, to what we feel is already an elite team of professional coaches, is huge win for our organization and clientele.  Glenn’s knowledge and passion for the game of hockey and the development of athletes is exceptional and will fit right into the culture of the RINK. We are looking forward to using Glenn as a valued resource to both the Winnipeg and Kelowna locations.”

Want to hear more from Glenn? Check out the Around the RINK Podcast where Glenn joined the crew to talk about his career in hockey, his new role, and much more. >> CLICK HERE

The RINK Hockey Corp. is a Winnipeg, Manitoba, Canada based company founded in 2009 by people passionate about a unique approach to skill development and the game of hockey. Our team of professionals are committed to setting the standard of excellence and innovation in hockey in an environment where exceptional performance has no limit with the vision of being a complete hockey resource for personal and professional development. The company owns and operates the RINK Training Centre (located at 57 South Landing Dr.) and its respective Player and Goalie Development divisions, as well as the RINK Testify Performance whose focus is sports-science and data-driven training.  The RINK Hockey Corp. also owns and operates the RINK Hockey Academy, with locations in both Winnipeg, MB and Kelowna, BC, which delivers student athletes a world-class education-based hockey experience. The RINK Hockey Corp. prides itself on delivering development to all ages and skill levels while upholding a culture that fosters love for the game of hockey.