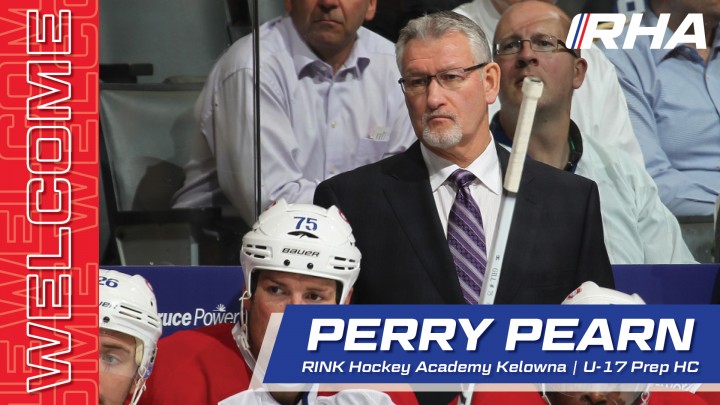 RINK Hockey Academy Kelowna is proud to announce that veteran NHL coach, Perry Pearn will be joining RINK as Head Coach of the U-17 Prep Team in Kelowna, BC. Perry has an extensive coaching resume with experience coaching at Junior, University, National and Professional levels.

“We couldn’t be any more excited to have Perry Pearn become a part of RHA Kelowna. He has over 40 years of coaching experience at the highest levels from the NHL to winning three consecutive gold medals with Team Canada at the WJC. More importantly for RHA, Perry is one of the most respected coach developers in the game. His expertise in leadership, team building, and creating a positive and winning culture is second to none. He will be an incredible asset for all our staff and players alike.” says Executive Director of RINK Kelowna, Maco Balkovec.

Pearn coached at the Northern Alberta Institute of Technology for over 10 years. During his time coaching in the ACAC, he had the opportunity to coach at the Canadian National Level multiple times. In 1993 Pearn led his team as head coach to win a gold medal at the IIHF World Junior Championship and since has been awarded 3 World Championship gold medals. Spending over 20 years coaching in the NHL with the Ottawa Senators, New York Rangers, Montreal Canadians, Winnipeg Jets and Vancouver Canucks. During the summer months, Perry runs elite-level camps in his hometown of Alberta for major junior and professional players.

“I have been fortunate enough to coach at many levels. Every level I have coached at I have learned and grown from different experiences while coaching at minor hockey levels all the way to professional. I am looking forward to working with grassroots hockey players again to help them achieve their dreams and get them to that next level.” says Perry. “I couldn’t pass up the opportunity to work at a hockey academy as I believe they are the fastest growing side of hockey. I am excited to join the solid foundation RINK has built and grow with the company and my team.”

Perry will be joined by assistant coach, Larry Robinson for the start of the 2021-22' season.